Given annually, the David Stolberg Meritorious Service Award recognizes a member for his or her exceptional volunteer work. Nominees may not be a board member or anyone who is paid by SEJ.

Volunteers are the lifeblood of SEJ. Member-volunteers organize tours and panels for the conference, implement the awards program, contribute to the SEJournal, serve as mentors, and sit on any number of committees. Absent our member-volunteers, SEJ could not achieve the results it does.

This annual award honors exceptional volunteer work by an SEJ member. It was created by the SEJ board in 1998 and named in honor of SEJ founder David Stolberg.

Much of SEJ's best work is accomplished by member-volunteers: tour and panel organizers for the conference, awards program leaders, contributors to SEJournal, SEJ-talk and www.sej.org, freedom-of-information watchdogs, mentors and leaders in diversity outreach. Volunteers define the heart and soul of SEJ, and they expand the group's reach and significance in ways that are not easily measured.

David Stolberg had a 38-year career with Scripps Howard that included duties for the Scripps Howard Foundation's annual Meeman Awards for excellence in environmental reporting. Stolberg always believed in "the value of networking, of the subliminal training that comes from an association with one's peers." In the 1980s, when Stolberg was assistant general editorial manager of Scripps Howard, he came up with the SEJ idea and kept suggesting it to Meeman winners until he found one who was willing to put in the volunteer time to organize with other journalists and make something happen. That person was SEJ's founding president, Jim Detjen.

To nominate, send name(s) and thoughts about each nominee’s volunteer contributions via email or postal mail to the SEJ office: The Society of Environmental Journalists, 1629 K Street NW, Suite 300, Washington, DC 20006. Excerpts from nomination memos may be quoted by SEJ online or during presentation of the Stolberg Award unless the nominator indicates that he or she does not give permission for this, or wishes to remain anonymous. Supplemental materials in support of nominations are welcome. Send your nomination(s) today to sej@sej.org.

All programs and services of the Society of Environmental Journalists are designed by journalists to strengthen and increase news coverage of environmental issues. 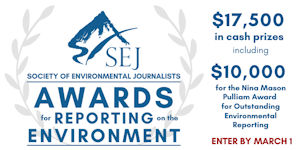 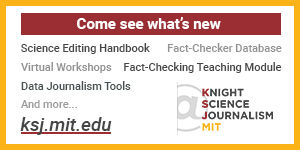