SEJ sponsors its own annual contest to honor the year's best environmental journalism in newspapers, magazines and newsletters and on television, radio and the Internet (annual deadline is April 1). There are also many other awards and grants for reporting on environment-related topics, as well as fellowships. Below are links to our lists of non-SEJ awards, grants, fellowships and workshops. For chronological listings by deadline, see our Calendar.

Apply for a Rapid Response Grant from SEJ's Fund for Environmental Journalism. Topics eligible for consideration include: Climate or conservation in North America; oceans and coasts globally; water security in the United States; and the Mississippi River basin. Grants: Up to $2500 per individual or $5000 for team or news outlet projects. Rolling deadline. Sign up for FEJ announcements, including upcoming rounds.

The "Lizzie" Grant is named for Elizabeth Grossman, a longtime SEJ member. Lizzie was elected to the board in 2014. She devoted her career to uncovering environmental health issues while tirelessly advocating for freelancers until her untimely death in July 2017. The grant(s) will provide funding, up to $5,000 per grantee, to help cover travel and expenses related to sustained coverage of a particular topic in environmental health. It will be offered under the Fund for Environmental Journalism. 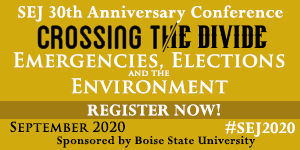