SEJ’s Fund for Environmental Journalism invests in public service reporting on environment and the journalists who produce it.

Grants up to $5,000 are offered once or twice yearly for stipends and expenses such as travel, multimedia production, translation and more.

Sign up for FEJ info to receive announcements of upcoming competitions and other FEJ-related information.

November 18, 2019 (11:59 p.m. local time) was the deadline for the Winter 2019 round. Grants up to $5,000 were offered for stipends and expenses such as travel, multimedia production, translation, and more. Story proposals that reflect diverse perspectives (including, but not limited to, gender, racial, ethnic and economic diversity) were encouraged.

The Winter 2019 competition was generously underwritten by The Wilderness Society, The Pew Charitable Trusts and other foundation and individual donors to the Fund for Environmental Journalism.

U.S. public lands: The operational definition is "areas of land that are open to the public and managed by the government (federal, state, local and tribal)." Read more.

You don’t have to be a member of SEJ to apply, but you do need to be a professional journalist who would qualify for SEJ membership. See policy.

To enter as a member, complete the SEJ membership application BEFORE you apply for the grant. Only logged-in members can access the $0 application fee.

Winning projects are selected by an independent jury of editors appointed by the Society of Environmental Journalists Board of Directors. SEJ maintains a strict policy of confidentiality with regard to story ideas submitted through FEJ competitions.

NOTE: We cannot work with early proposal/early decision applications. Notices of awards and declined applications will go out within 2 months of the proposal deadline. Grant agreements must be co-signed and IRS W-9 forms returned to SEJ before grants can be paid and public announcements made.

Your gift makes a difference!
Please support future rounds of competition by making a donation today. 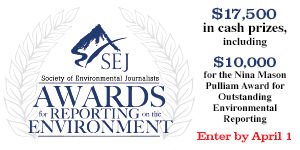 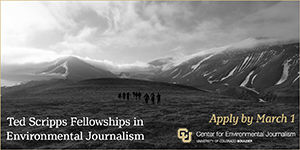